Day 24 A Brief Retrospective In Photos In No Particular Order, Mostly

There will, I’m sure, be many more photos from the trip available as people make their way home and post them. But for now, here’s a look back at some of the events, people, and places mentioned in the blog. A fitting end, I hope—after all, a picture is worth a thousand words.

Thanks for reading along, and for all your comments. I hope you enjoyed following our journey. Now go get a river permit and do it yourself.

And finally, courtesy of Kristen Burkholder, who joined us from Diamond Creek, a musical look at the trip:

(with apologies to Gilbert and Sullivan)

They are the very model of a modern river running crew

Collecting photos, measurements and stories of the boating few

Yoshie, Tom and HazelTom, Norm, Pam, Elmira in the tub

Up and down the beach they trudge, crew hauling gear at every stop

The cameras recreate old photos, filming every flip and flop

They are the very model of a modern river running crew! 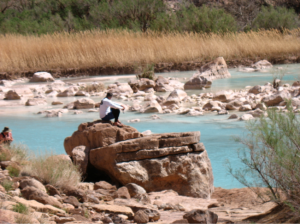 Craig Wolfson lounges on a boulder beside the amazing turquoise waters of the Little Colorado River. Another tough day. 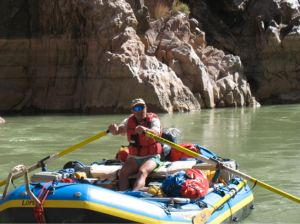 Norm Takasugawa, sweep boat and keeper of the condor cage. And the 462 pounds of M&M’s. 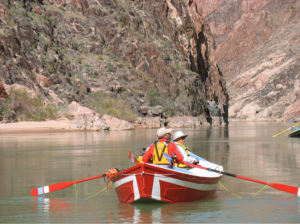 Greg Hatten (rowing) and Dave Mortenson in the replica Portola. You can’t see the booze or lollipops from here, but trust me—they’re aboard somewhere. 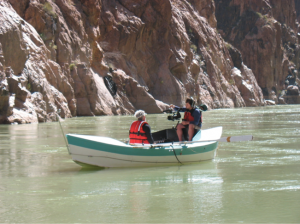 Randy Dersham and his hat being filmed by videographer Ian McCluskey aboard the replica Susie Too, sister ship to the Portola. 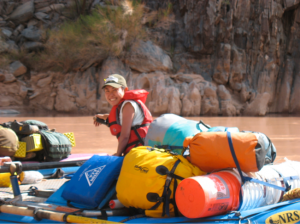 The ever-cheerful Yoshie Kobayashi rowing the Hyde on the mud-brown waters of the Colorado River. 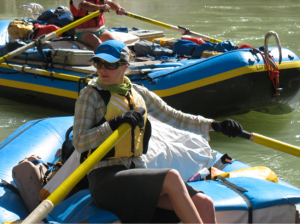 Crystal Elliot brings a fashion sense and cleanliness to river running that borders on the unacceptable as she rows the Hyde on a flat stretch, edging past Norm Takasugawa in the sweep boat. 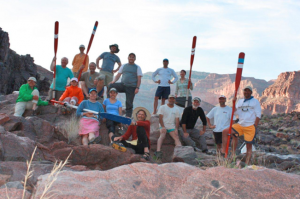 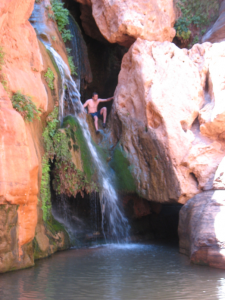 David Perez about to take the leap into the icy waters of Elves’ Chasm. Is it a coincidence that the only one of us to make this jump was also the only one to run a raft through a big hole on purpose? 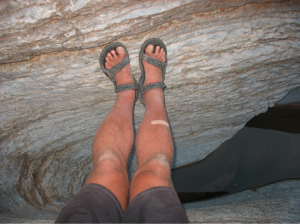 Tom Pamperin contemplates his descent strategy high up in the frog ponds of Forster Canyon Narrows, with nightfall not far away and his flashlight waiting in his tent. 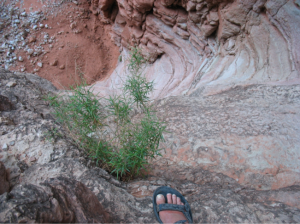 Tom Pamperin asks himself—yet again—“How the hell did I get up here?” during his Forster Canyon hike. 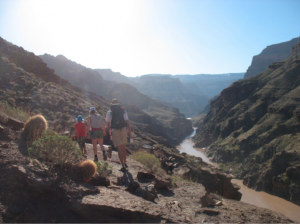 Natalie Mortenson, Cece Mortenson, and Richard Carrier heading out on their Deer Creek-Thunder River-Tapeats Creek loop hike, with a can of coconut juice, a few sandwiches, and 8,364 games of “I Spy” in their near future. 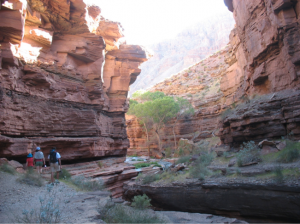 Natalie, Cece, and Richard in the amazing Deer Creek Canyon, nearing the patio. The narrow slot to their right is a hundred feet deep, and narrow enough to jump across if you’re stupid enough to try. 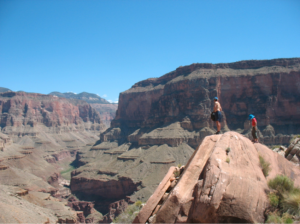 Cece and Natalie Mortenson about to begin the long hot descent into the Tapeats Creek drainage near Thunder River. Not quite halfway done with the loop; more than halfway out of steam. 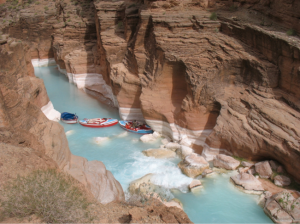 The replica Gem, Flavell, and Susie R in the amazing turquoise waters of Havasu Creek. 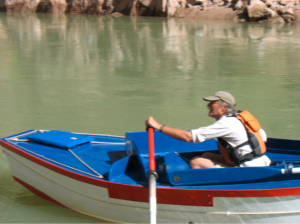 Tom Martin rows the replica Gem he built in 2009–the tallest guy on the trip in the littlest boat. He has done four Canyon runs in the Gem—so far… 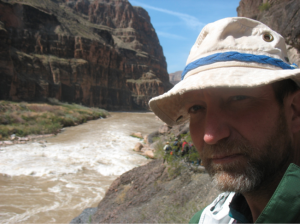 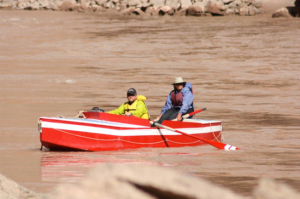 Leif Mortenson rows his mother Pam in the replica Flavell, both of them ready for action. 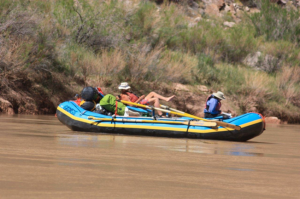 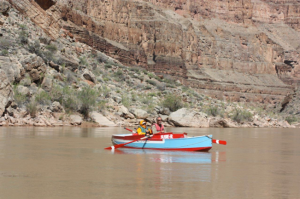 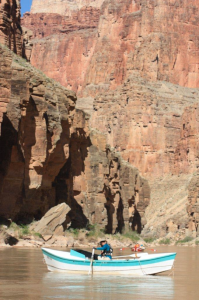 Richard Carrier , Chilean Frenchman fantastique,  rows the Susie Too on a stretch of flat water. 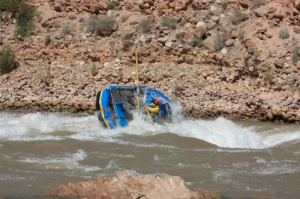 David Perez takes on the hole at 209-Mile Rapid, and the hole wins. (Tom Martin photo) 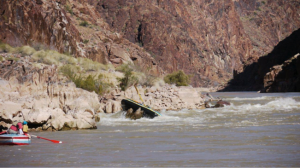 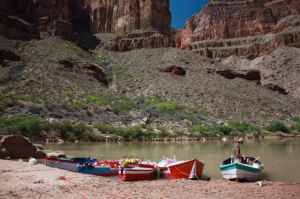 The stars of the show. Left to right: Gem, Susie R, Flavell, Portola, and Susie Too. 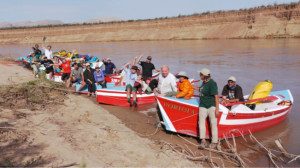 2 Responses to “Day 24 A Brief Retrospective In Photos In No Particular Order, Mostly”