Up before the sun, at 5:30. Not too many people stirring yet. A few birds chirping, the sky just
right enough to see by, the quiet rush of the water flowing past. The plan is for the kitchen crew
to be up at 6:30, with coffee call for the rest at 7:00, giving us enough time to pack up our tents
and gear before breakfast. The first day of re-packing the boats, Tom Martin tells us, will be
slow–we’ll be lucky to hit the water by 10 a.m. Thinking of the mountains of gear and the
matrix of cam straps required, I mentally adjust Tom’s prediction to 10:40 a.m. But then, time
doesn’t matter too much here anyway.

The quiet morning is reminding me that it’s been far too long since I’ve done a long trip in
canyon country–and I’ve never done one in Grand Canyon. A perfect place to be. I can just hear
the kitchen crew moving around, heating water, getting ready to serve breakfast. A good time to
tell you a bit more about the boats.

Of the five historic boats represented by replicas on this trip, Moulty Fulmer’s Gem was the first
one built, in 1953. Unlike Norm Nevills’s 1940s cataract boats, Gem is based on a McKenzie
River dory hull. When Moulty Fulmer first saw a McKenzie river boat, he knew it was
something that could handle the big water of Grand Canyon. Strong rocker for maneuverability
in fast water, flared sides for stability and buoyancy, it almost seemed meant for the rapids of the
Colorado–and with the addition of decks fore and aft, and big buoyancy chambers bow and
stern, Fulmer had his boat. Built in 1953 out of plywood, Gem was launched in 1954, and went
on to run Grand Canyon for years, the first dory design on the Colorado. If you run into a hard
boat on the Colorado today, its pedigree starts here, with Moulty Fulmer’s Gem. 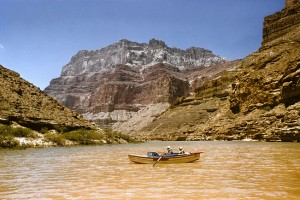 (MF and his 15-year 0ld niece at LCR in 57)
Moulty Fulmer and his 15-year-old niece Pris in the Gem on their epic 1957 high-water run through Grand Canyon.

The replica Gem on our trip was built by Tom Martin. In the process, Tom discovered the reason
for Gem’s tiny transom (a true McKenzie River dory is a double ender): Gem’s hull is so short
and fat that Moulty Fulmer wasn’t able to bend the plywood hull panels in far enough to make
the double-ender Fulmer had hoped for. Still, with its banana-like rocker, both ends of the boat are out
of the water anyway, and nothing was lost with the addition of a transom.

Badger Creek Rapid, like most of the rapids we’ll run, is the result of debris flushed into the
Colorado River from an  intersecting side canyon–two of them, actually. Look at Badger Creek
Rapid from above and you’ll see the shape of a cross, with the main Colorado running generally
southward between tall cliffs, and two tributaries (Jackson Creek on river left, and Canyon Creek
on River right) crossing at the same point. The boulders and debris washed down these tributary
creeks chokes off the Colorado, forcing it to splash and surge its way over the obstacles. Those
constrictions create the standing waves, whirlpools, eddies, holes, and drops that we’ll have to
find a way through. Right-side up, with luck.

Besides giving us our first real chance to film the replica boats in action, today will be my first
test at the oars of my raft. Badger Creek, at river mile 8 (our launch point at Lee’s Ferry was mile
0), is the first real rapid we’ll face. It’s a 15′ drop in about 1/6 of a mile, and is rated 5 out of 10
for difficulty. We’ll see…

Finally, don’t be misled by the detail I’m providing here about the rapid. If it sounds like I know
what I’m talking about, that’s because I’ve stolen the information from the fourth edition of
RiverMaps’ Guide to the Colorado River in the Grand Canyon–a collection of topographic
maps that covers the river from Lee’s Ferry to South Cove. Tom Martin (with co-author Duwain
Whitis) wrote it. So the information is his; the mistakes (I’m sure there will be some) are mine.

Now I’m off to pack up my tent and gear, and maybe have enough time left over to explore a
ways up Seven Mile Draw (which empties into the river here at Six Mile Camp, at river mile 6–
go figure) before we launch.

Badger Creek Rapid, it turns out, is fairly idiot-proof. Line yourself up at the center as you begin
and the river takes you where you want to be–which is definitely not always the case. Still, the
veteran river runners on the trip agree that Grand Canyon whitewater tends to be like that. The
trick is knowing where to start each run.

After the rapid we stop for lunch, and to re-match a photo from the 1957 trip. Here Moulty
Fulmer, Brick Mortenson, Pat Reilly, and Dwayne Norton stopped to discuss their strategy for
the high water. Dave Mortenson has a photo of the four men gathered around a boulder,
considering their strategy for the extremely high water they were facing that year. Dave calls for
volunteers to re-stage the photo, and thanks to my floppy hat I get to play Pat Reilly. A few
minutes of adjusting poses (“sit taller.” “can you straighten your arm?”), a few photos, and the
rematch is done. 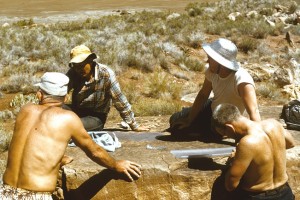 From left to right: Moulty Fulmer, Pat Reilly, Brick Mortenson (in pith helmet), and Dwayne Norton. The four men stopped here to discuss the challenges of running the Colorado at 120,000 cubic feet per second–and rising.

The rest of the day is flat water and small ripples we don’t bother to scout. The flat water is
deceiving, though, because “downstream,” it turns out, is largely a myth. The river goes where it
wants to go, and unless you have an eye for the right line, you’ll find yourself rowing upstream
as the water swirls and eddies. There are subtle clues that let the trips good rowers keep moving
fast just by positioning their boats in the right place. It’s a knack I’m determined to pick up for
myself. I don’t have it yet. I’ve been rowing harder than the good boatmen, with less to show for
it.

We’re behind schedule by afternoon, and stop to discuss whether we’ll end the day by running
House Rock Rapid today as originally planned. Boat after boat, though, comes in ready to camp
here, above the rapid. It’s been a long day for everyone: filming Badger Creek Rapid,
re-matching photos, and for us beginners, learning to read the river so we can keep up on the flat
water. We’re all happy to camp. After finishing the dinner dishes (it’s my team’s duty night), I’m
headed for bed at 9 p.m.