Note: Yesterday’s rigorous empirical testing confirms that you can immerse a flash drive in 47-degree water and it will still work.

It’s 6:22 a.m.–Daylight here in the canyon, even on a small beach tucked in beneath steep cliffs, and people are beginning to stir. There’s the clank of pots and pans as the breakfast crew begins their work, a few quiet voices, and the sound of the river as it ripples and splashes along a rocky riffle along the shore. My tent is set up in a rocky cove at the very base of the tall red cliffs that ring the camp, and I have the Grand Canyon for a front porch.

Last night, just before I stumbled into my tent after a day that felt much longer than the ten river miles we rowed, I joined Norm Takasugawa and Craig Wolfson on the beach. These guys know rivers, and have run Grand Canyon dozens of times. At the pre-launch dinner I asked Norm what he does in real life, when he’s not being a river rat.

Which, though probably not strictly true (I haven’t seen anyone on the trip work harder than Norm), has given him a lot of time on the Colorado. Norm has been our sweep boat, the last man down the river. It’s his job to solve any problems that the rest of us run into, fish us out of the water when we flip, help us to safety.

Craig, I find out, used to be a competitive waterski racer. Probably not the kind of racing you’re thinking of, though. Craig has hit 102 mile per hour on skis, behind a 21-foot boat with 1800 horsepower, and he and his wife Pam (she learned to ski at age 5) have both skied the Grand National Catalina Ski Race, about 50 miles out to California’s Catalina Islands and back. Open ocean. On one ski.

“It’s much easier that way,” Craig tells me. “Less friction.”

Dave Perez, another of the first-time rowers on the trip, asks him what’s the fastest Craig ever crashed at.

“Concrete,” he says. “When you’re going that fast, you don’t penetrate the water. You just keep skipping across the water until you get to about 60 miles per hour. Then you go under.” He shrugs.
“I moved on to safer things. Like motorcycle racing in the desert.”

Last night Norm and Craig were talking about House Rock Rapid. It’s one that gets their attention
even now, after countless runs through the Canyon (either that, or they were talking it up to
scare the new guy). You enter on river left and have to row hard across the current to avoid
getting swept into a horrendous mess of something or other–I’m not sure what, but it sounds ugly:
a giant hole that will swallow an 18-foot raft? A mass of boulders to wrap a boat around?
A whirlpool to suck you under? Whatever it is, I’ll be rowing HARD across the current. And it
still may not be enough. Meanwhile, if you go too deep with your downstream oar, it’s likely to
hit a rock that will pop it out of the oarlock to hammer your ribs or give you a knock-out blow
to the jaw.

Half the “fun” of a river trip, I suspect, is dread. I’m having lots of fun already.

At the top of a big rapid, you drift slowly downstream, standing up in your raft trying to spot
something that looks familiar from when you scouted the rapid onshore. You have to find the right
entry point, or you’re screwed. Keep your raft sideways, broadside to the current, so you can
quickly adjust position by rowing forward or back. And you wait, still trying to make sure. More
waiting as the river slides you closer and closer. Moving a bit faster now as the water starts
to drop into the rapid. Still waiting. “You’ve got all the time in the world,” Tom Martin tells us.

Too much time. That long slow drift to the lip where the world suddenly drops away is the worst
of it. It’s like a trip to the dentist–you know something is going to happen, but you’re not
sure how unpleasant it’s going to be.

Then when you’re lined up, it’s time to GO. In this rapid that means keeping your boat sideways,
bow toward river left and rowing hard with the upstream oar to keep it that way. And you GO.
Big waves that throw you around so hard that it’s all you can do to keep hold of the oars.
And the oars themselves yank you around, almost pulling you from your seat. But somehow you make
it through the entry without going too far wrong. Keep rowing across the current, trying to stay
away from whatever is waiting at river right.

What’s waiting at the bottom of House Rock Rapid on river right, it turns out, is a hole. I’ve
heard people use that term before, but this is my first chance to see one. It’s just what it
sounds like–a circular spot in the river, maybe twelve feet in diameter, where the water level,
for some arcane reason of hydraulics and flow and other things my C- in high school physics
won’t let me understand, is lower–four feet, maybe–than the surrounding river. Picture it
this way: if the river were a huge bowl of pudding, a hole is where someone who got there
ahead of you has scooped out a big spoonful.

I sweep by the House Rock hole at the end of my run, with my left oar close enough to touch
its lip. Close enough for a good long look down into it. Either I got lucky, or I did something
right in the big waves of the upper section. I’m starting to feel like a boatman.

Then just downstream, in a smaller rapid that’s nothing more than a couple of big waves,
I’m almost hurled from my boat–only a tight grip on the oars keeps me aboard. I end up
sprawled across the deck, trying to crawl back to my seat.

Imagine a good-sized house set down in the middle of the river–that’s Boulder Narrows.
There’s a thirty-foot-wide passage on either side. We stop here to film the five replica
boats as they go past–three of them (the Susie R, the Flavell, and the Gem) duplicating
their original 1957 high water trip, and two (Susie Too and the Portola) recreating a 1962
run–probably the last run of the wild river, as the gates of Glen Canyon Dam were shut later
in the trip. More on that later. Meanwhike, lugging camera gear and tripods up the steep
slopes is hard work. At our next stop I snap a photo of our videographer, Ian McCluskey,
with a tripod in one hand and not one, but two cans of Pabst Blue Ribbon in the other.

Today the rock at Boulder Narrows stands about twenty-five feet high above the river.
There’s a pile of driftwood on the top from the 1957 flood. When Moulty Fulmer and Pat Reilly
ran this stretch at 100,000+ cubic feet per second, the rock was completely submerged. 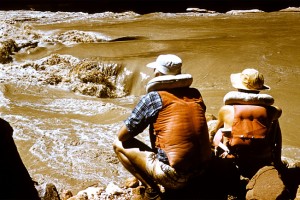 Moulty Fulmer-left-and Pat Reilly-right-scout Boulder Narrows on their 1957 run. They saw
what no one has seen since–the entire house-sized boulder submerged in the river’s flow.

Later in the day we stop to re-match photos from the 1957 trip. Here Tom Martin and Dave Mortenson have managed to identify one of Fulmer and Reilly’s campsites. If you’ve seen the Canyon, you’ll understand the enormity of that accomplishment. These guys have found the actual rock where Reilly and Fulmer set their coffee pot in 1957. They found their fire ring, with bits of charcoal buried under the sand.

Reilly and Fulmer camped at the river side in 1957–you can see one of their boats in a photo from this spot, in front of a distinctive boulder. If you were to park a boat here today, you’d have to drag it up steep slopes and dunes 75 yards from the river, and 50 feet up. 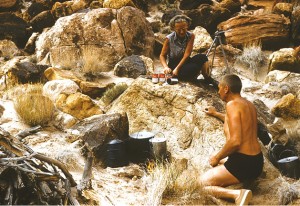 Pat Reilly and Ruth Pieroth at 22-Mile Camp on June 12, 1957. The River is running at 126,000
cubic feet per second, the highest water ever run. Charcoal fom their fire (they burned
driftwood on their trip) is still there, high above the river now.

I ask Dave Mortenson how in the world he and Tom Martin managed to find this spot again,
after 55 years. With a hell of a lot of work, it turns out.

“I see a picture and I can kind of tell you where it is, based on the rock,” Morten tells me.

Depending on how far along the Canyon you are, you’ll have different layers of rock exposed.
From top to bottom: Kaibab Limestone, Toroweap Formation, Coconcino Sandstone, Hermit Shale-a
distinctive dark red, the only layer I’m confident I can actually identify so far-the Supai
Group, Redwall Limestone, Muav Limestone, layer on layer on layer, a giant geological slice
through the eons.

“So then you’re looking at–we also have journals that they kept on the trip,” Mortenson
tells me. “They in their journals will say, ‘We camped at river right’ at mile such and such.
You can’t go by today’s mileage, because it may be a little bit off. But it gets you close.”

“We have visual clues and we have known clues, and you try to put that together,” Mortenson
says. “It’s Sherlock Holmes stuff, you know?”

Tom Martin, who wrote the book that I stole the description of Canyon geology from earlier,
did a lot of the leg work. From the journals and photos, he knew about where Reilly and
Fulmer camped. Then he took the photos along on a river trip and stopped at a likely side
canyon, one where the Supai Sandstone was exposed, and seemed to match the photos. Close,
but not close enough. It had to be a side canyon a little upstream, Tom decided.

But since there’s no rowing a heavy boat upstream, and you can only get one Grand Canyon
permit per year, Tom had to wait until his next trip to find out for sure. Another year.
The search, for a historian like Tom Martin, is an obsession that can’t be denied.

The Canyon seems to have that effect on people who know it.