It seems wrong somehow, but apparently we have two-way communication of a sort, even here, deep in the Canyon. Leif Mortenson tells me people reading the blog have been curious about how my flash drive ended up in the water. Nothing dramatic, I’m afraid: I just dropped it in a couple of inches of water in the bottom of my raft. And apparently it’s still working. On with Day 6.

How to write the wind? That’s what Tom Martin asked me a couple of days ago. I’ve been looking for an answer ever since, and this morning I find one.

“It’s real fun when you’re sitting on the groover and you can feel the spray from the pee bucket on the side of your face,” David Perez announces as he returns to the beach where we’re loading boats.

Which would be funnier if we didn’t have to row into this wind today. Wind is as much of a force here, almost, as the river itself–at least for a high-windage boat like these eighteen-foot rafts. On this note, the knowledge On Trolling Battery Advisor and how to choose the right one comes of great help, as it is the power of the battery against blowing winds. It’s blowing hard today, easily gusting 35 knots, and everything is either tied down or sailing away. Last night a couple of camp chairs landed in the fire, and this morning’s “clean” dishes are coated with sand.

And it’s a headwind, of course, funneled right up the canyon as usual. With it come gray clouds and even a few scattered drops of rain. But as we finish getting the boats ready (breakfast is at 7:00, and we’re usually underway a little before 10:00 each morning after a frenzy of packing and strapping things down), the wild gusts die down to a breeze. A miraculous reprieve. The clouds, too, have passed as the front moved through, leaving blue skies overhead. When we shove off I’m in shorts and a T-shirt as usual. I have yet to put the rain fly on my tent.

Starting from our camp at Little Nankoweap, today’s run takes us past a set of ancient granaries tucked under the canyon walls above the main Nankoweap camps. We don’t have time to hike in and see them today–another reason to come back. Ruins like these, more than a thousand years old, are scattered all over the Southwest canyon country. I ask Tom Martin what the current thinking is on why the Anasazi abandoned their canyon
dwellings.

Dwindling resources, Tom tells me. The canyon country was settled in a warmer, wetter weather pattern–one that died out about a thousand years ago. As water for agriculture became scarcer, the canyon peoples built fortified dwellings and granaries along the cliffs, places that could easily be defended against raids. Imagine climbing up to a ledge, needing both hands to pull yourself up, knowing that there’s someone waiting with a club to smash into your head as soon as you start to make the move. Crude but effective.

But a return to drier, colder weather marked the end of agrarian life in the canyons, and the granaries were abandoned as the inhabitants moved away–which was about the time the Viking settlements in Greenland came to an end in the Little Ice Age. People forced to live in tougher conditions, with less and less to rely on for food, for energy. The end of one civilization, with another waiting in the wings to replace it.

Which makes me wonder who’ll be wandering the strip malls and gas stations a few hundred years from now, pulling artifacts from the ruins and wondering where everyone went.

I’m rowing downriver, it’s obvious that Glen Canyon Dam has brought an end to yet another world, though not a human one: all along the river on both sides is a line of dead mequite trees, high above today’s water levels. Before the dam these trees would have gotten enough water in periodic floods to survive. Now their roots are dry, and the trees themselves are brittle and weathered, little more than driftwood rooted to the canyon floor. The entire Canyon has changed: vegetation, wildlife, the whole system adjusting
to new conditions, to the changes we’ve imposed.

“Look on my works, Ye Mighty, and despair!”

Ten miles downriver we come to the Little Colorado River, which pours into the Canyon on river left, 62 miles from our launch point at Lee’s Ferry. The Colorado flows south here, and the rocky butte of Cape Solitude towers 3,400 feet above the Little Colorado’s south bank. A band of cliffs 1,500 feet high line the northern shore. And in between flows a stream whose bright turquoise water wouldn’t be out of place in the Keys or the Bahamas. It’s a striking contrast to the Colorad’s greenish waters. Before Glen Canyon Dam, when the Colorado ran red more often than not, the contrast would have been even greater. The two rivers used to run side by side for a long time before mixing, one a deep red and the other a startling blue.

The Little Colorado appears blue because it’s spring-fed, and its clear waters have a high concentration of calcium carbonate–chalk–which lines the rocky banks and reflects the blue of the sky like the white-painted bottom of a swimming pool. But here in the canyons, the bright blue is incredible. It feels like someone has uprooted a stream from The Blue Lagoon and dropped it here in the canyons of the Southwest.

The blue is a perfect match for the blue-painted decks of the Flavell, the Susie R, and the Portola. The red-white-and-blue Harper Goff color scheme on Reilly’s boats is one I never would have chosen for myself, but I have to admit the guy knew what he was doing. The colors bring a human presence to the Canyon, but an appropriate one; no motor rafts or jet boats, just simple wooden hulls and oar power. I’ve never been interested in drift boats before–I’m not much of a fisherman, and haven’t been since pulling bullheads
by the bucketfull out of a childhood pond in northern Wisconsin–but after seeing what these boats can do in whitewater, I’m interested. Watching the Gem or Flavell launch themselves off the top of a standing wave like a leaping porpoise, I’m starting to realize there’s a lot more to these hulls than I realized. 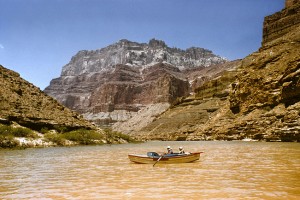 Moulty Fulmer and Pris Ratican in the Gem at the confluence of the Colorado and Little Colorado Rivers in 1957. Since the river is in flood, most of the bright blue is gone, replaced by muddy waters washed down from the canyon walls.

We spend an hour wandering the banks of the Little Colorado. On the southern shore a quarter mile upstream is a tiny rock hut tucked in under an overhang: Beamer’s Cabin. Some miner or trapper had a view out his picture window.

The Palisades of the Desert

Below the Little Colorado, the river continues generally southward below a line of cliffs known as the Palisades of the Desert. This is the stretch Tom Martin referred to as “the wind tunnel” in his morning briefing, but today we’re lucky, encountering no more than moderate breezes. We pass up a campsite at Palisades Creek and continue on to Tanner camp, just above Tanner Rapid. Below the Little Colorado we’ve left Marble Canyon, and the walls pull back as the main canyon widens considerably. Our camp at Tanner has more sky than we’ve seen for days.

I’m rowing along, the third or fourth boat in to the beach. The goal is to pull in tight to the raft beside you and lash all five together for a stable platform. The wood boats moor off the sterns of the rafts so that dropping water levels overnight won’t put them on a rock and smash a hole in the bottom.

I’m just congratulating myself on how I’ve avoided the mistake of pulling in too early, letting the current put me just where I want to be before I push toward shore, when Tom’s wife Hazel calls from the bank.

“You can start pulling anytime,” she says in mild frustration, watching me slide well downstream of where I’m supposed to be.

“These new guys,” Norm Takusagawa says as he catches my bow line from the stern of his raft, pulling me back upstream and tying my raft alongside the others. “You can’t teach them anything.”

Well. Maybe a few things. I did spend the day learning how to feather my oars. I’m good enough at it now that I get them into the water with the blades perpendicular to the current more often than not.