There is a condor on the cliff at the skyline on river right and 300 feet up.

Today was launch day so we all had to have everything we were bringing with us on the River Runners Beach just downriver from the Lee’s Ferry Boat Launch Ramp by 9 A.M. for the ranger orientation. Long time ranger Peggy, who had met a good number of both groups launching, was our assigned ranger for the talk, which usually lasts a little over an hour and serves to reinforce what we already know about keeping the Grand Canyon clean and safe for all of us. Pam Mortenson puts out sweet rolls for everyone and we do the last minute packing and loading of the rafts and wood boats, making sure everything is tied down. There is an old adage that anyone who takes up rafting or kayaking hears often: “Rig for a flip and Dress for a swim”; in other words, be prepared not to lose what you have loaded on the raft and dress safely so you won’t get caught with loose clothing or flapping lines – anything that you could get caught in and drown if your raft flips in any of the rapids we will begin running today.

We have the 7 drivers from Bullhead City who will be driving our vehicles and trailers back to Meadview and Bullhead City where they will be stored until we come out on the 29th of March. We have people who have been on past river trips and friends and spouses who have come to see us off. We get everything tied down and push off shore and head downstream. The first riffle is where the Paria River comes into the Colorado River, and at higher water it can sometimes be a problem, but today the flow is low and it just contributes an “au Latte” look to the river because it is carrying a heavy silt load. This is a nice little bounce and most of the friends and family are waiting on the beach at the Paria Riffle to see us go through. John West is there taking photos so some of you have probably already seen us on Facebook. Then we run the 4 miles down to Navajo Bridge, going though a few small rapids and there are our friends waiting to see us pass under the bridge. 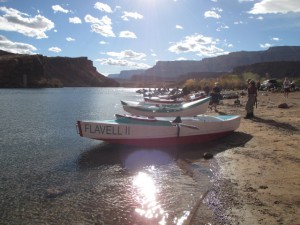 2014 Launch of Susie Too and Flavell II Replicas (Photo by K. Wolfson)

Arnie Richards is at the dirt road overlook another 3 miles down river and calls out to us as we get ready to run Badger Rapid – the first one that requires climbing out of our boats and climbing a small hill to get a good look at the rapid and decide how we are going to run it. We have a few new boaters with us so we discuss the relative merits of each feasible route there is, make our decisions, and make our way back to the boats. The raft carrying the photographer goes through first to get into position and Dave Moretnson hikes from the scout point, which is 75 feet up on a rocky hillside, down to the upper beach to get into position. Izzy also goes through first to get into position, rowing the raft through and then setting up. We three rowing the wooden boats (Greg Hatten in the Portola, Craig Wolfson in the Flavell II, and myself in Susie Too) float loose and tighten our PFD straps and then float down, sideways at first so we can pull and push on the oars to get the bow into final position to make the entry we want. The tongue goes into a hole over a ledge or rock and has a large standing wave breaking into that hole, which could stop forward momentum and flip a boat, so we decide to enter on the left side of the tongue just right of some large black rocks sticking out of the waves. I face right – position is exactly where I want to be – and pivot to face downstream and drop into another smaller hole. Susie’s bow rises up immediately as I push the oars forward and we are off with 3 or 4 good waves to go over, and then the lower end of the rapid with 2-3 foot waves coming latterly from both sides, which rock the dory sideways as well as up and down. We are dancing across the water just as she was intended to do until the upper part of the beach where I must land, so I pivot her right sideways and pull hard for the left shore against a strong current heading right. We make it with an assist from an upstream eddy, but I land with an elevated heart rate for the excitement and short, hard exertion. She took in about 3 inches of water – not enough to trigger the sump pump, but enough that I must bail and sponge for several minutes to get her dry. The rear seat hatch also has water for the first time so I had to sponge that out and will have to spend time working on her hatch gaskets. Greg Hatten makes a perfect and exciting run and later says that that was much better than his first run here two years ago and he is pleased.

We set up camp by unloading all the group gear and personal gear we will need for the night. I am on the toilet team so Leif Mortenson and I assemble the 3 pieces that make up the “groover” and go locate a nice scenic and private place to set it up, assemble the seat on the solid waste can and the smaller seat on the pee bucket. The word “groover” comes from what your butt cheeks looked like after sitting on the ammo can that the early river runners used here – even with the addition of a comfortable toilet seat mounted on a metal flange that fits the ammo can securely, the name and history has followed the equipment into modern usage. Ask anyone who has ever been on a river trip what a groover is and they can immediately tell you.

The cook team assembles a meal of salmon cooked over an oak firewood coal fire served with rice and roasted vegetables, after a first course of cheese soup and a fresh salad bar and warmed bread. We will all sleep well tonight.

Ed. note: Unfortunately, due to the limitations of the sat-phone, photos from the river will most likely not be sent in with the blog.