A fairly uneventful day completing our run through a series of 10 rapids called the Roaring Twenties, stretching from just past river mile 20 to river mile 29. Short easy runs that we don’t bother to scout. Along the way we stop at Vasey’s Paradise to refill our water supply. Here a small waterfall drops directly from a limestone cliff far above. It’s a simple task to haul our 5-gallon water cans up to a convenient little pourover and fill up. Pure water, filtered by hundreds of feet of limestone filter. We drink it as is.
Later in the day we stop at Redwall Cavern.

Redwall Cavern is a huge low-arching cavern mouth on river left. That is, it looks low until you notice the people standing on its sandy floor. Tiny people, with tiny boats pulled up on the beach below. Redwall Cavern is immense. I snap a couple of photos as I pull in from upriver, but I’m not a good enough photographer to do the place justice.

Tom Martin and some of the others match photos from earlier trips here while I simply lie back on the sand and stare out the cavern’s mouth at the river and the cliffs beyond. You could easily play a football game inside the huge cave, complete with hail Mary passes arching high overhead. But when Pat Reilly and Moulty Fulmer passed Redwall Cavern in 1957, much of it was underwater. 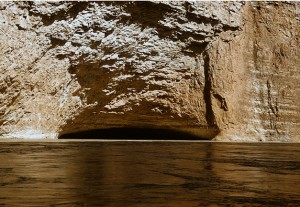 In the summer high season, about 180 people launch from Lee’s Ferry on Grand Canyon river trips each day, and you wouldn’t find Redwall Cavern empty when you got there. In fact, except for one other party of rafters who passed us because we stopped to film and rematch photos, we’ve seen no one besides ourselves on the river.

“I always say preparing for a Grand Canyon trip is Class VI logistics,” Tom Martin told me when I arrived in Flagstaff. Now that we’ve been on the river a few days I’m beginning to understand what he means.

Our arrival in camp each night sees a flurry of unloading boats and hauling an incredible amount of stuff up onto the beach: tables, tarps, kitchen boxes, food boxes, boxes full of dishes and bowls and silverware, stoves, more food boxes, charcoal, fresh produce (each raft carries a huge cooler filled with blocks of ice and meat and produce and who knows what–each cooler is big enough to hold a corpse, even without dismembering it first), the groover and its supply box, a camp chair for each person, stoves, water jugs,
propane canisters, batteries to charge cameras and laptops, a complex and somewhat Rube Goldbergian hydro generator to recharge the batteries, camera gear and tripods for our videographer, and heaps of dry bags filled with tents, clothes, and personal gear. I’m probably leaving a bunch of stuff out. An eighteen-foot raft will hold a whole lot of gear, and we have five rafts on the trip (though one, it’s true, is only a sixteen-footer).

One the boats are unloaded, anyone not on duty for the night finds a spot to set up their tent or roll out their sleeping bags. But some of us are working each night; fifteen of the sixteen people on the trip are divided into three-person work teams (the sixteenth person, nine-year-old Natalie, has homework to do each night instead). One team sets up the groover when we arrive at camp, and packs it up again to load in the morning. Another team cooks dinner (what we Midwesterners would call supper) and then prepares breakfast and lunch the next day. Yet another team washes the dishes after dinner, and again at breakfast the next day.Since there are five teams and only three duties, that means there are two teams off each night. So the order of duties is: groover set-up one night, cook dinner the next, off the next night, then dishes the next night, then off, then back to groover detail.

It’s enough stuff to make you feel like you’re on an EXPEDITION. Which might be the point, I suppose. Apparently “light and fast” is not a philosophy that’s caught on with river runners. Which has a bright side, after all: it’s harder for a heavy boat to be flipped by a big wave.

Still, I wonder what Pat Reilly and Moulty Fulmer would think of the heaps and heaps of gear we unload every night. Or what they would think of a trip blog.