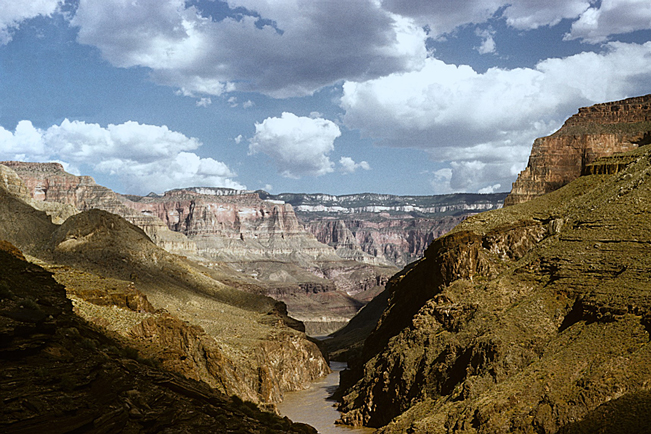 Today’s run takes us from Schist Camp at river mile 96.5 to Hotauta, 108 miles downriver from Lee’s Ferry. Blue
skies and sunny weather all day, temperatures in the 80s. It’ll be another perfect day in a perfect trip. Along the way we’ll hit Crystal Rapid. Rated a 9 of 10, this will be our biggest water yet–a seventeen foot drop with
some rocks at right, a couple of big holes in the middle, and Slate Creek Eddy on river left. After the
notorious Lava Falls, Crystal might be the biggest rapid in Grand Canyon.

After breakfast we cruise downriver for about two miles and then pull in to scout Crystal on river right. It’s
another complicated three-camera set-up for filming, which means a long time to wait on shore watching the giant
waves exploding, imagining what they can do to a boat or raft caught there. Greg Hatten is waiting on shore with me, getting ready to run the replica Portola through Crystal. “If we’re going
to scout this long, they need to set up the groover,” he says. I know what he means.

The waves are big, with a couple of holes that look like they might be able to eat an eighteen-foot raft; on the
left, Slate Creek Eddy waits, like a stretch of river that’s seen the imprint of a giant hand which has pressed
down on the water so hard that the water level in the eddy is several feet lower than the main channel. Get caught
in there and I’m not sure anyone could row out without getting pinballed off the rock walls. There’s plenty to
think about here.

Finally word comes that the cameras are ready–rafts run first. I manage to delay my departure long enough that
Hazel Clark and Yoshie Kobayashi, go first. My trick backfires, though; by the time I row out toward the rapid,
Hazel and Yoshie have already made the first drop and are out of sight below. I won’t be able to follow her line.

The entry doesn’t seem too tricky, though, after talking it over with Craig Wolfson, Norm Takasugawa, and Tom
Martin on shore. I have to row across the river from our scout point on river right, and drop down the far left
side of the smooth green tongue that leads down into the waves, bypassing the first big hole on its left edge.
If I make that entry point, the rest of the line might take care of itself.

There’s a prolonged anticipation as you slide down the smooth V at the top of a big rapid. There’s nothing you
can do to avoid whatever’s waiting, and very little you can do to hurry it along. The raft gently gathers momentum;
there’s time for a lateral adjustment or two, a rush of second guessing (am I too far right? left?), and a moment
to ask yourself, ‘Where am I going, and why am I in this handbasket?’ and then you’re into it.

Now, at the top of Crystal, it’s time to turn the bow into the waves. I’ve set it up perfectly this time, right
where I want to be, and everything’s working as planned. The raft punches through the far left side of the first
hole and we’re into the series of big waves down the left side of the rapid–a run known as Crystal Highway,
I find out later. But highway or not, we’re into some big water once we’re off the tongue. The first wave grabs
my oar blades and yanks me off my seat, and the next jerks both oars out of my hands for a moment. The river,
it turns out, will do whatever it wants with you, no matter how perfect your entry is.

I grab my oars again, dig the right oar into the water and pull hard, just in time to take another big wave
head-on. This one launches the bow so high it feels like we’re catching air off the top. The rest of the rapid
is just riding the wave train until only one obstacle remains: the rock garden at the bottom.

This rocky island can be passed either on the left or on the right. Hit it, though, and your raft will stick and
stick hard. It may take motor rigs or helicopters to get you off then. I decided ahead of time that I’d run down
the right side of the island. When I come to the bottom of the rapid, though, I’m almost pinned against the rock
wall on the left side of the river above the rock garden. That’ll make a right-hand passage around the rocks a
very hard pull.

I’m almost dumb enough to try it, though, pulling left in a doomed attempt to stick to my original plan. Luckily,
though, I give up after half a pull at the oars and point the bow downstream into the left channel instead. A few
more big waves and a short sharp drop and I’m through. Tom Martin, rowing the replica Gem three boats after, is not so lucky.

“You want to be in the right place,” he tells me later, “and then you want the timing to work out.” Which doesn’t
happen for Tom at Crystal today.

“I went just too far right, in the left run,” Tom explains. “just a misjudgment.”

Maybe a boat-width too far right; maybe catching a wave at the wrong time, just as it goes big; maybe some
combination of the two–whatever happened, Tom was in trouble almost immediately after entering the rapid.
The first big wave after the initial hole caught the Gem and flipped it over, and Tom ended up under the boat.

“It took a long time to swim clear or the boat,” he says. “A long time being…five seconds?”

Tom was able to work his way out from under the boat, though, and climbed up onto the upside-down hull. For a
while it looked like the Gem would be bounced off the left wall at the base of Slate Creek Eddy; then it looked
like it was heading directly toward the rock garden–either of those would be disastrous for a wooden boat. Tom
was trying to decide if the boat would have a better chance of clearing the rocks if he jumped off to lighten it
when the problem solved itself.

“We stopped going toward the rock garden and started going into the left channel,” he says. “And the left
channel is a good place to be.”

Tom’s wife Hazel met him at the bottom of the rapid, rowing out to intercept the overturned Gem. She tried to
throw Tom a line to pull him aboard her raft.

“I said, ‘No, I don’t want a rope, I want you,'” Tom says. So Hazel had to jump into the cold river, grab the
flip line, and help Tom turn the boat over, something he hadn’t been able to do on his own. With the two of them,
the boat popped over easily and the crisis was past.

“And we pulled into a little cove and the bottom,” Tom finishes, “and just spent the next, I don’t know, twenty
minutes bailing out all the hatches.”

The rest of the group makes it through without problems, with Norm the odd man out as usual, running the right
side where everyone else ran left. That’s Norm. We’re doing all right, but we’ve had people in the water three
days in a row: Hazel, Randy, and now Tom. All of them experienced river runners. So far the rookies (Crystal
Elliot, David Perez, and I) have avoided major mishaps.