Just before 6:00 a.m. and it’s starting to get light. We’re camped at a place called Tatahatso, a small sandy beach tucked in a bend at river left, 38 miles downriver from our put-in at Lee’s Ferry. Above us a huge bowl-shaped amphitheater is carved into the cliffs overhead–a short steep slope and a few moves along a narrow ledge gets you
there. Yesterday Greg Hatten and I climbed up there, and scrambled further up to the lip of the cliffs overlooking the camp kitchen. A loooong way down.

My memories of Grand Canyon before this trip date from a road trip with my parents and grandparents when I was six years old: a stop in a gift shop, an hour or two looking down from overlooks along the rim, and a short hike partway down the mule trail from the visitor center. Seeing it from the river is another world.

It’s a deep narrow canyon here at river level, even miles above the inner gorge. Tall red and gray and brown cliffs drop from the sky to the river’s edge. Weird pinnacles and hoodoos line ridges hundreds of feet above. The river snakes its way through bend after bend, and each turn reveals a new variation of rock and sky: natural bridges and arches, huge caves, abandoned mine shafts, hanging canyons and dry pourovers that would quickly become hammering waterfalls in a flash flood. At night only a narrow slice of sky is visible, studded with starts brighter than you’d see from any city.

I’m beginning to think I’ll be putting my name in for a river permit of my own for next year.

Today will be another easy day, Tom Martin tells us at our morning briefing. No big rapids to run, and the wind looks like it should be backing off. We’ll stop at President Harding Rapid to look for the only campsite from Moulty Fulmer and Pat Reilly’s 1957 high water trip that Tom Martin and Dave Mortenson have not been able to find yet. With the other campsites they had photos to work with. And although they know Fulmer and Reilly camped above this rapid, there are no photos to work with.

“We’ll be looking for a very tiny needle in a very big haystack,” Tom says. Indeed.

The river winds generally southward for several miles out of Tatahatsu before it sweeps into an S-curve six miles long. President Harding Rapid sits in the middle of the S, just past the remnants of an incredible wooden bridge built high up the limestone wall on river right: Anasazi Bridge, part of the ancient network of trails that the Canyon’s former inhabitants built centuries ago. I can’t even see a way up to the bridge, and they used it as a roadway.

After we run President Harding Rapid (an easy drop), we pull in for lunch and a bit of digging around to see if we can find any evidence of Fulmer and Reilly’s camp. Tom Martin has a pretty good idea where the water level was in 1957–you can see the driftwood from that year high above today’s water levels–and a few of us wander around looking for tin cans or fire rings. I find a mess of driftwood caught in a dead mesquite tree. Buried inside is a blue-bottle, with a graduated scale running up one side. Nearby is a chunk of milled lumber with a bent rusty nail in it. I call Tom over–would Fulmer and Reilly have used a glass bottle?

No, Tom decides. He thinks the stash of driftwood I discovered is probably from the 1921 flood (a nail from the similar 1880s flood would have been square, not round), which crested about 1,000 cubic feet per second higher than it did on Fulmer and Reilly’s 1957 trip. But that means we’re close–the water would have only been about a foot or two lower in 1957. Fulmer and Reilly’s camp would be at almost this same elevation. With any luck, contouring along at this level above the rapid will eventually turn up some hard evidence. But not today– we’ve got some miles to do yet.

I tuck the bottle back in the driftwood where I found it and we head back to the boats. But I can’t help stopping at each likely flat rock or camping spot along the way, hoping to be the one to discover the lost camp: a bit of charcoal, a tin can, anything. The search is oddly addictive. I imagine Tom Martin will keep looking here every time he runs the river. Maybe someday he’ll find it. Maybe not. Archeology provides no guarantees.

Neither does the Canyon. Above Harding Rapid lies the grave of Peter Hansbrough, who drowned in Grand Canyon in 1889. A year later, Robert Stanton’s survey crew found his body here and buried it at the base of the cliffs above the rapids, carving his initials (PMH) into the cliff face where they can still be seen today.

Just a couple of minutes further walk upriver from the Hansbrough inscription is another grave, a Boy Scout who drowned in Glen Canyon in 1956. Fulmer and Reilly aren’t the only ghosts here.

After Harding Rapid, the canyon turns westward to finish its giant S curve. Westward, into a stiff west wind. Soon our little fleet is spread out over a long stretch of river as we row into it. At one point I stop rowing in the middle of a fast-flowing ripple and the wind pushes my raft several yards upstream. It’s a hellaciously long row to the next bend, where the headwind grows even stronger, pouring up the canyon. We pull in to regroup at a camp called Dinosaur at mile 50, then finish the day with a couple more tough miles upwind, camping for the night at Little Nankoweap, 52 miles downriver from Lee’s Ferry.

Elementary physics again–air forced through a narrow slot (a canyon, for example) will speed up. Up is the right word, as in upriver, upwind. Up and up and up. Today may not be the Everest of upwind rowing (and Everest is over-rated anyway), but it’s probably an 6,000 meter peak. Rowing through this wind it’s easy to park the raft just by lifting the oars from the water and sitting there dead in the current, which is flowing somewhere between 3 and 5 miles per hour.

Had I known physics was going to be so important later in life, I might have paid a little more attention in
Mr. Oldenburg’s class. 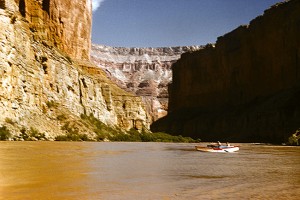 Moulty Fulmer rows Gem toward Little Nankoweap in 1957. In the photo he is just above our campsite–except that in 1957, our campsite (25 feet above the river today, remember) was completely underwater.

While the river was fairly smooth below Vasey’s, it contained a lot of fast-moving drift, including tree
trunks, and sometimes the entire tree, root to branch…

Pat was a good distance ahead of the others as he approached Little Nankoweap. The water was at a stage
where a large eddy on the right side of the river plowed into returning water from a somewhat smaller eddy on the left. Suddenly, a large whirlpool formed about thirty feet in front of Pat, Susie, and Joe. Pat
figured it was thirty feet wide, ringed in the middle, and about ten feet deep. A nine-inch-diameter log
Pat estimated at twenty feet in length stood up on end and rotated about the center of the whirlpool like
a swizzle stick in a drink… 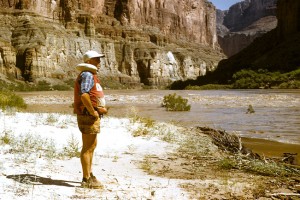 Moulty Fulmer ashore at Little Nankoweap on June 13, 1957–looking for Pat Reilly’s whirlpool. Fulmer and Reilly lined the boats past this stretch. 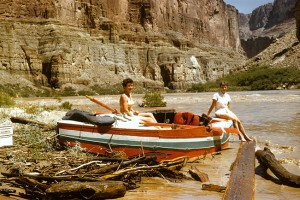 But if there’s anything worse than rowing an overloaded raft into a stiff headwind–20-25 knots, I’d
guess–it’s unloading piles and piles of gear from the boats and setting up camp. Again, physics:
work = force x distance. It takes a lot of force to hoist all that gear, and our campsite is 25 feet
above the water. And the wind hasn’t let up either. Every few minutes a particularly energetic gust
throws a fine haze of beach sand over everything.

I’m on dinner crew tonight, along with Crystal, another first-time rower, and Dave Mortenson. After a
lot of scrambling from boat to boat looking for tonight’s food, we finally manage to set up the camp
kitchen and serve up a respectable meal of hamburgers, brats, stir fry, and French onion soup–with fresh
tomatoes, avocados, sliced onions, ketchup, mustard, bacon bits, Swiss cheese, buns, and cookies for
dessert.

No one complains about the sand.