Six months ago I had the good luck to meet Dave Mortenson, who has introduced me to an entire world of river runners, canyoneers, and yes, boat builders, a group that spans the decades from the 1940s to today. Norm Nevills. Moulty Fulmer. Brick Mortenson. P. T. (aka Pat) Reilly. Men mixed up in the beginning of modern Grand Canyon river trips and the origins of the dory-based whitewater boats still used to run the river even now. Mortenson and his friends know the history of Grand Canyon river running—they’ve lived it, told stories about those days, written books and made films about the early river runners.

And those early trips! It’s tempting to think of the past as a Golden Age, easy to romanticize things and forget the advantages of our own time. I’m certainly guilty of that; modernity seldom suits me, with its rejection of the real world—the one I want to live in—and its proselytizing enthusiasm for the digital and online replacements that threaten to overwhelm us. But if there is such a thing as a Golden Age, the 1940s and 1950s was probably it for Grand Canyon river rats. These were men—and women—who ran the river with a degree of self-sufficiency that would be an anachronism in today’s world of cell phones and GPS. They designed and built their own boats, dragged them to the river on rutted tracks that deserved the label of “road” only at the best of times, and when they ran into trouble on the river, they got themselves out of it.

So, this blog: a record of a trip through Grand Canyon, in boats first designed and built by Moulty Fulmer and Pat Reilly in the 1950s and 60s. We’ll follow in their wake, camping where they camped, matching their photos with the river today. Along the way you’ll meet the boats, the people who built them, and, I hope, get some sense of what it’s like to run the Colorado River these days from the perspective of someone (me) who’s never done anything like it before. Twenty-four days and almost three hundred miles on the river, chasing ghosts in Grand Canyon.

We’ll try to post a new update every day—but, canyons being what they are, that may not always be possible. We’ll do our best. Meanwhile, you can find out more about the Grand Canyon scene and the history of river running, along with pictures and video clips of the boats you’ll meet in this blog, at:

Prologue: The Magic of Rivers

Name a river and you name an adventure, a journey into the heart of whatever lies waiting just ahead, around the next bend. A trip down a river is an entry into another kind of world, a sly meandering timeless world that hides the best of itself from the land it runs through and the people living along its banks. That is the magic of rivers, the source of their enduring appeal. For anyone with a boat and a set of oars or paddles, even the humblest local streams run strongly enough to pull us well out of reach of calendars and schedules, if only for an afternoon: Paint Creek. The Little Wolf. The Rat. The Fox. The Kickapoo.

And in the West, no river has a greater claim on our dreams than the Colorado. Threading its way through the endless canyons and buttes and spires of the Southwest, the Colorado is an icon or an archetype as much as it is a river. Since John Wesley Powell’s 1869 expedition (and even before then), a trip down the Colorado has been a siren song, and the country it traverses has become a symbol of a wildness as rare as it is valuable, a litany of what might have been, and a record of what yet remains. Glen Canyon. The Gates of Lodore. Cataract Canyon. Grand Canyon. But the stretches still undammed are places you can’t see, can’t really know, until you’ve run the river and looked up at the towering walls from a boat, scrambled up side canyons and walked along narrow beaches, rather than just looking down on glimpses of the river from a distant parking lot.

To see the river and the canyon country it passes through on their own terms as much as possible—that, for me, is the lure of the Colorado. But I’ve never run real whitewater, never invested the time and gear to learn the language of rivers like this, rivers which, in their rushing descent through millions of years of geology have carved spectacular rifts and canyons—canyons which squeeze the water into narrow fast-moving chutes and rapids.

Big rapids, some of them.

I met Dave Mortenson at the Port Townsend Wooden Boat Festival in September of 2011. He was sitting in the shade of a couple of odd-looking garishly painted little red-white-and-blue rowboats, fully decked double-enders with flat bottoms and little rocker. They were loaded on two trailers, side by side, with Dave in a folding chair between them. I walked by him a few times, actually, glancing at the boats without saying anything. Bigger fish to fry. Gaff schooners. Oughtred yawls. Elegant faerings and sprit-rigged longboats. John Welsford and his SCAMP.

Finally, though, I took a closer look, curious about what they were. Expedition rowboats? With their large sealed chambers, you’d have good flotation and room to store plenty of gear. They seemed heavily built for that, but I couldn’t come up with anything more likely. Turns out, though, that they were whitewater boats, replicas of historical designs created in the 1950s by Grand Canyon river runner Pat Reilly. 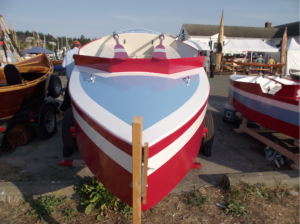 The launch is very near. → ← Follow our 2014 Grand Canyon river trip on our daily blog